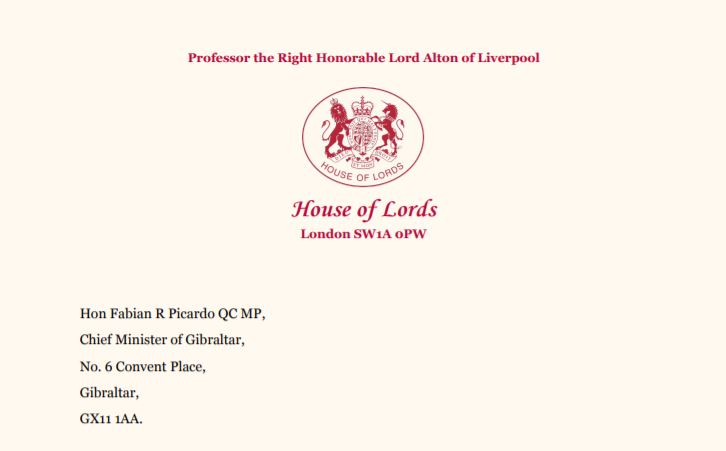 “ We the undersigned, implore the Government of Gibraltar not to proceed with this proposal to remove legal protection from the unborn child, but instead work toward the protection of both mothers and their children and to continue to courageously uphold the most fundamental of all rights, the right to life”

A spokesperson for the Gibraltar Pro Life Movement (GPLM) has warmly welcomed a letter sent from House of Lords member David Alton to the Chief Minister recently and co-signed by fifteen other public representatives from around the world.

“The Government of Gibraltar, in common with all governments, has a duty to act in the public good and protect human life at all its stages”

The Parliamentarians confirm that there is no onus on the Government of Gibraltar to introduce legislation as a result of a court decision in relation to Northern Ireland.  It says:

“We note that you have justified the introduction of this proposed legislation based on a reading of a judgment given by the Supreme Court of the United Kingdom relating to the abortion laws in Northern Ireland. Contrary to your stated position, we are unanimous in our view that this judgment creates no legal obligation on Gibraltar to introduce any changes to its law on abortion.”

Furthermore the letter refers to various human rights instruments – including the Gibraltar Constitution – which affirm the fact that the right to life should be protected.  It states:

“The Universal Declaration of Human Rights, the International Covenant on Civil and Political Rights as well as the Convention on the Rights of the Child, all require that governments protect the right to life in comprehensive terms. Additionally, the European Court of Human Rights has found that there is no “right” to abortion under the European Convention on Human Rights. In the domestic law, the right to 2 life has been enshrined in successive Gibraltar Constitutions (in 1969 and 2006).”

Commenting on the statement, chairperson of GPLM Karenza Morillo said:

“Our Chief Minister has heard from us, the people of Gibraltar.  Now he has heard from his peers around the world.  He has heard from our faith leaders, he has heard from legal and medical experts and he knows now, more than ever, that there is neither a need for this law, nor support for this law. On the contrary, there are many people here in Gibraltar who have already confirmed that they will vote against any politician who supports this unjust legislation”

“We urge the Chief Minister, his advisors and this Government to take on board the points of view of all of those who have been in touch with them in recent weeks and months to express their concern about the Bill.  Instead we ask the Government to put its efforts into providing positive supports for women in unplanned pregnancy and their families”.

The letter was one of a number of letters sent to the Chief Minister in recent days.  A letter from three eminent academics (one of whom, Prof Richard Ekins of the University of Oxford, is an expert in constitutional law), was also circulated to MPs which categorially stated that Gibraltar does not have any legal obligation to change its law.**

“We hope that our elected representatives will examine these letters, that they will listen to the people of Gibraltar and that the Bill will not be put to vote in Parliament.  If it is, we hope that our MPs will be on the right side of history and choose life-saving rather than life ending solutions”.

Full text of letter from Parliamentarians can be downloaded below

Letter from Lord Alton and Others to Chief Minister

Full text of letter from academics can be downloaded below

Letter From Legal Academics to Chief Minister of Gibraltar