Huge crowd attend Rally For Life in Casemates this evening 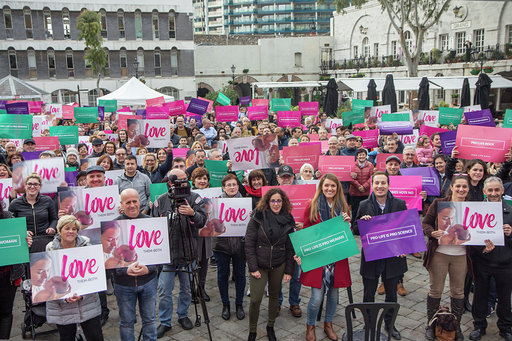 GPLM held their second rally for life in Casemates Square this evening at 5:30pm. The event was addressed by a host of speakers from Gibraltar and further afield.

Addressing a packed square, MC Stefanie Yeo reminded attendees why they were there. She said:
“We are here because we believe in a Gibraltar that protects our unborn children and supports our mothers into the future.
“We are here because we are united in favour of a NO vote on 19th March. Our motto is Save Babies and Vote No and that is what we are asking the people of Gibraltar to do on 19th March.”
British politician and member of the House of Lords, David Alton spoke at the event. He outlined how in Britain many unintended consequences of the abortion law had happened with the result that today there are over 200,000 annually on England and Wales. He said:
“Science teaches us that life begins at fertilisation. And science has moved on dramatically since abortion was legalised.
When the UK’s obsolete limits were being set, we didn’t know what was happening in the womb. We do now. This is a law which flies in the face of science and humanity. Today we know so much more about the undeniable humanity of the child in the womb.”
Bernadette Goulding of Women Hurt spoke about her abortion experience and the lifelong challenges that resulted from it. She challenged the false message of choice saying:
“I was offered no other alternative – no other choice. I regret that bitterly.”
Claire Culwell from the US also addressed the event. She told her story of surviving an abortion that killed her twin, her premature birth and adoption by a loving family. She thanked all those present for speaking up for people like her. She said:
“I am a twinless twin in the name of choice. I am one of many survivors of abortion. There is a domino effect to abortion. Not just the woman and the child but it is generation after generation that we see missing in the name of choice. You can do something about it here in Gibraltar. You can vote NO on 19th March. Please keep up your work and thank you for your commitment. You are fighting for the lives of people like me.”
James Brenig of GPLM outlined the reality of how extreme the proposed law is – allowing not just abortion up to 12 weeks by which point a baby has a beating heart, a functioning brain, arms, legs, mouth, nose, and all its major internal organs – but also throughout the full nine months of pregnancy.
He challenged the suggestion that abortion is healthcare saying:
‘Let’s not pretend this is healthcare. the proposed law would make it possible to end the life of a baby at any stage under the guise of improving a woman’s mental health. There is no other medical procedure that has the purpose of directly ending the life of a human being.’
Children in attendance lit candles on stage representing the future generations of Gibraltar, yet to be born.
The rally closed with an announcement that the movie “Unplanned” would be shown in Gibraltar next week and a trailer was played.
Patricia Parody, Chairperson of GPLM commented after the event:
‘We are really pleased with the event this evening and the energy and momentum within the pro-life side. We are confident that the people of Gibraltar, when they are fully informed of what the proposed law means, will opt to save babies and support mothers on the 19th of March by voting No. 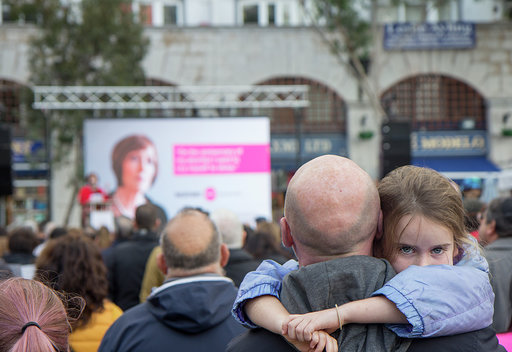